The Hope That Never Fails

Hope. A very short, simple, yet powerful word. The American Heritage Dictionary defines hope as “the feeling that what is desired is also possible, or that events may turn out for the best.” To “give up hope” is to reach the end. To “keep on hoping” means there may yet be a chance, however small, that what is desired will come to pass.

How many great men and women heard, “It can’t be done,” and did it. Or, “It’s useless to try,” but tried and succeeded? If Abraham Lincoln had given up after his second business failure, we would have had no such president to guide this nation through a time of terrible tragedy. Or if the firefighters and police had decided that it was too dangerous to try to rescue people from the burning World Trade Center towers on September 11, 2001, how many thousands more would have died?

If any man in history needed hope, it was David of Israel—the young man who, more than three thousand years ago, wrote many of the Psalms in the Bible like the one quoted above. God chose him to be king and sent the prophet Samuel to anoint him even though another king, Saul, who had failed God, was still on the throne. David’s election to the kingship was not greeted with fanfare, but with hatred and intense persecution. He often had to flee for his life from Saul’s men. “My tears have been my meat day and night, while they continually say unto me, ‘Where is thy God?'” (Psalm 42:3)

Yet this same man wrote, “The Lord is my light and my salvation; whom should I fear? The LORD is the refuge of my life; of whom should I go in dread?” (Psalm 27:1) David could rejoice even in terrible times, and he lived through many, because he knew that the One in whom he trusted would never fail. He was realistic and knew exactly what he faced, but found in God a sufficiency far beyond his own abilities to meet every circumstance. The Psalms were not poetical abstractions; they are the story of his life. By this, he blessed his generation and has blessed everyone who has read his Psalms ever since.

“The Lord is my shepherd; I shall not want…. Yea, though I walk through the valley of the shadow of death, I will fear no evil; for thou art with me.”
(Psalm 23:1-4)

In what will you put your trust? What do you seek from life? King David lifted up his “eyes to the hills.” These “hills” were mountains in Israel which, when he was on the throne, embodied the glory of his kingdom, and when he was facing persecution, were a place of safety and refuge. Yet for David, they were also a reminder that life’s hope lay entirely in God.

Today, men and women look to other “mountains,” albeit of a different kind, in which to find help and hope for their lives. By “mountains,” I mean the powerful institutions of government, business, science, law, etc. which have developed in our day to a magnitude far beyond anything David knew in his day. Many people seek careers in these fields and put their trust in the security and satisfaction that positions in such fields afford. The temptation is to believe that somehow such institutions will go on and on, and therefore remain safe places to be in.

We do not live in a secure, predictable world, however. History teaches us much about the frailty of nations and people that the continuity of day-to-day life can cause us to forget. How many people woke up in New York City or Washington D.C. on the morning of September 11, 2001 expecting that day to be different from any other in their experience? Yet sadly, tragedy, death, and war have been part of the human experience for thousands of years.

“My soul, why art so filled with woe, when God through Christ hath loved thee so? ‘Tis He that says to me, ‘May peace be unto thee.'”

If King David’s hopes had been built upon his continuation as King of Israel, he would have been bitter and heartbroken when his own beloved son, Absalom, led a rebellion that forced him off the throne. On the contrary, because he trusted in the God of Abraham, Isaac, and Jacob, he said on the day of his flight from Jerusalem, “If I find favor in the sight of the Lord, then He will bring me back again.” (2 Samuel 15:25) And the Lord did restore him to his throne! 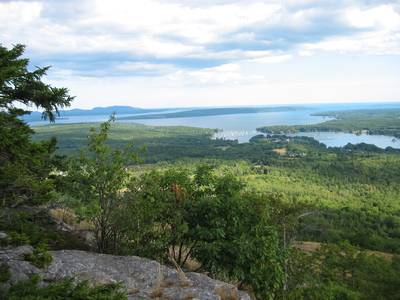 I remember that, when I was six years old, I was fascinated by a world so new and fresh to me. One day I climbed Blue Hill Mountain in Maine. Near the top, I wedged myself between two stones above a drop-off. Surveying the beauty of the land, sea, and islands below caused me to wonder, “Who made all these things and why?” It was as though my eyes were opening for the first time to see that there was more to life than my own little world of experience.

Most men and women become so absorbed in day to day affairs that they overlook more important, even eternal issues. If you do that, your world may one day collapse around you, and you will not know what to do. If we do not keep things in perspective, our eyes easily become focused only on the immediate affairs of self. As Psalm 90:10 declares, “As for the days of our life, they contain seventy years, or if due to strength, eighty years, yet their pride is but labor and sorrow; for soon it is gone and we fly away.” Let your eyes be opened, beginning now, to the truths of the Scriptures, eternal truths which circumstances and the passage of time cannot change. “Remember your Creator in the days of your youth, before the time of trouble comes.” (Ecclesiastes 12:1)

As the years of your life go by, where will your help come from? Will the object of your trust never let you down? Is your trust in your own resources and strength rather than in God? He has the answers to the needs and longings of every human heart. The answers are found in His Son, Jesus, who died so that we could live. As the disciple Peter said, “To whom can we go, Lord? You have the message that gives eternal life, and we have come to believe, yes more, we know by experience, that you are the Holy One of God.” (John 6:68) Hope built on the God of Israel “never disappoints us.” (Romans 5:5)

“I have been young, and now am old,” King David wrote near the end of his life, “yet I have not seen the righteous forsaken or his children begging bread.”
(Psalm 37:25)